If not treated promptly, or if another strain of the disease is contracted, a more severe disease, Dengue Hemorrhagic Fever will almost always follow, resulting in death or permanent disabilities of the victim. Proper protection against Dengue Fever can prevent the unfortunate from happening.

Dengue fever is a serious mosquito-borne disease. It is most common in subtropical and tropical climates, especially in the Pacific Islands, Southeast Asia, Latin America and the Caribbean. However, it can be found almost anywhere where the Aedes mosquito lives. According to the CDC, up to 400 million people are infected by dengue fever each year. An additional 100 million people are at risk of being infected.

How Does Dengue Fever Spread?

There are actually four dengue viruses, which is one reason why the search for a vaccine and for treatments has been slow. If you get a mild form of the disease and are then bitten by a mosquito infected with one of the other three dengue viruses, you do not have immunity from those additional viruses. You will get sick again. In fact, you’re likely to get a more severe form of dengue fever if you’ve been exposed to one of the viruses before.

Dengue fever transmission doesn’t happen from person to person. You can’t catch the disease from someone who has it. The most common way to get infected is through the bite of an infected mosquito — a mosquito that has bitten someone with dengue fever. In rare cases, a pregnant woman can pass the disease to her unborn child or the disease may be spread from infected donors via blood and organ transfusions. Mild forms of the disease can produce a range of symptoms, including:

Some people — especially younger patients — may not experience any symptoms at all with a mild case. In fact, up to 75% of people who are infected may never develop any symptoms, which can increase the risk for transmission. People who feel fine and aren’t aware they may be carriers may head outside and resume everyday activities. If they are bitten, the mosquitoes that bit them can then transmit the disease to others.

Since the disease has vague flu-like symptoms and since many people have no symptoms at all, dengue fever is often underreported and can be misdiagnosed. Patients may think they simply have the flu when they have the disease and in many cases patients recover fully without anyone knowing they had the disease. As long as they are infected, however, they can pass on the disease if a mosquito bites them and then bites someone else.

If symptoms do develop, they usually start about four to ten days after the patient is bitten by an infected mosquito. In many cases, with a mild form of the illness, symptoms go away naturally within a week or so.

Dengue Fever in the USA?

Dengue fever is relatively rare in the U.S. Between 2001 and 2004, for example, the CDC reported 77 confirmed cases of the illness, mostly from travelers who came back infected after being bitten abroad. However, there have been small outbreaks of the disease in the U.S. — and there is a potential for additional localized outbreaks. These happen when people come back infected and are bitten by Aedes mosquitoes, native to the US. Those infected mosquitoes can then pass the disease to others in the area. This type of secondary transmission has been responsible for a few small outbreaks in the United States. In 2005, for example, there was an outbreak in Texas and another small outbreak happened in Hawaii in 2001. In 2009 and 2010, dengue fever was also found in Florida.

Due to climate change, experts say there are more reports of dengue fever outbreaks now. Any country with Aedes mosquitoes needs to be aware of the risks. With increased urbanization and increased air travel — reports estimate about 3 billion people traveled by airplane in 2015 — it’s easier than ever before for the disease to spread. It’s possible there may be more instances of the disease in the U.S. in the near future because of these risk factors.

If you have visited any area where dengue fever exists and you develop a fever, it’s important to see a doctor. Even if you have a mild version of the disease, you’ll want a full check-up and you’ll want your doctor to monitor you, since the disease can progress to the deadlier hemorrhagic fever. 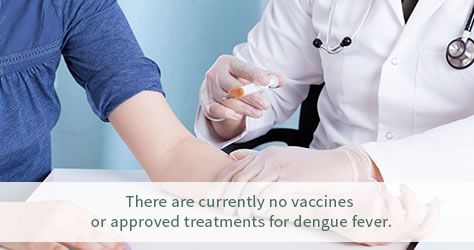 There is currently no treatment for dengue fever. In fact, even diagnosing the condition can be difficult because the symptoms are similar to malaria and other diseases. If you are diagnosed with dengue fever, your doctor may ask you to rest and to stay hydrated. You may be given pain medication for aches. If you have dengue hemorrhagic fever, you’ll usually be admitted to a hospital for monitoring. You may be given a blood transfusion, an IV to replace electrolytes and to keep hydrated, and you may be given medication or treatment to control any drops in your blood pressure.

New signs suggest a treatment for the disease may eventually be developed. One monoclonal antibody called VIS513 has been developed by the U.S. company Visterra for use as a treatment. India’s largest pharmaceutical developer of vaccines, Serum Institute of India, purchased the formula in 2015. In 2015, India faced the largest dengue fever outbreak seen in five years and has plans to fast-track the formula to make it available, even though it has only been tested on animals.

The search for an effective dengue fever vaccine has been slow. In 2014, six different vaccines were under development and a three-dose course for children saw positive results that summer after passing drug trials. However, while the vaccine was proven safe, there were no immediate plans to make the vaccine available to customers or doctors.

In 2015, scientists in Cuba developed a protein vaccine with some positive results. The vaccine, if proven effective in trials, may potentially work against all four viruses causing the disease. French company Sanofi SA was seeking approval for its own dengue fever vaccine in 2015. That vaccine reduced incidence of dengue fever virus by 61%, according to trials. The Sanofi vaccine is expected to be the first vaccine to become available. Scientists at UC Berkeley in the United States also made a breakthrough in 2015 when they identified a protein that could be blocked to help prevent dengue fever from developing into the more deadly dengue hemorrhagic fever.

How Can Dengue Fever Be Prevented

Since dengue fever vaccine development is still underway and since it may be some time before a vaccine or treatment is widely available, it’s important to focus on the fever’s causes and prevention. Since dengue fever is not curable with today’s treatment options, it’s essential to prevent infection in the first place. There are several ways to do this:

Stay inside when mosquitoes are most active. It is especially important to stay inside during dusk and dawn if you are in a location where there has been an outbreak of dengue fever.

Learn about the risk. If you will be traveling, check the CDC dengue fever map to see whether your destination is currently at high risk. If you need to travel to an at-risk area, be prepared to take extra precautions to avoid getting bitten by a mosquito.

Put screens on your windows. Screens keep mosquitoes and other biting insects out. If you already have screens, check them regularly to ensure there are no gaps, rips or cracks mosquitoes can fit through.

Use mosquito nets at night. At night, mosquito nets over your bed help you avoid waking up with mosquito bites. If you are traveling anywhere where outbreaks of dengue fever are common, you should bring your own net. Spray the net with an insect repellant before each use and try to get a hotel room with air conditioning. If you are staying at a hotel, you might not have much control over window screens and other preventative measures to keep mosquitoes out, so a net is important. If you are camping, a net can protect you from any mosquitos trying to get into your tent.

Use insect repellant. Look for a formula containing a 10 percent concentration of DEET or higher. Spray your clothing, gear (if you’re hiking or exercising outdoors) and yourself. Always follow the instructions on the bottle and re-apply as often as the product indicates.

Cover up with longer-sleeve clothing. Wear a hat, long-sleeved shirts and long pants with socks if you are going to be hiking or working outside. Thin, light fabrics will still let your skin breathe and will keep you cool while preventing mosquito bites.

Reduce any breeding grounds around your home. To prevent mosquito bites at home, lower the numbers of mosquitoes near your property. You can do this by eliminating any standing water or weeds. Mosquitoes need water to lay eggs, and their breeding grounds can be quite small. Even a birdbath or a water bottle cap filled with water can house mosquito eggs. Mosquitoes lay thousands of eggs and these eggs can hatch in just a week, so any standing water on your property can mean an infestation of mosquitoes very quickly. Mosquitoes can also hide in weeds and tall grasses, so eliminating overgrown hedges and tall grasses can also help.

When trying preventative measures, consistency is key. Always use several methods, such as screens, repellant and removing standing water around you home) and continue using preventative measures throughout the entire mosquito season. It only takes one bite to get a mosquito-borne disease, so work to prevent as many bites as possible.

The most important part of any dengue fever prevention plan is reducing the risk of bites. Unfortunately, mosquito bites are a numbers game — the more mosquitoes you have in an area, the more likely you are to get bitten and to contract a mosquito-borne illness. You may take precautions against bites, but if there are enough mosquitoes in the area you will eventually get bitten. All the dengue fever prevention tips in the world won’t help much if you simply cannot avoid bites.

Health organizations worldwide use insecticides and insect control to reduce dengue fever mosquito populations. On your own property, you may also be able to reduce mosquito populations to prevent bites and disease. However, you may not want sprays and insecticides near your home. The chemicals might not be safe for children or pets and may be expensive to re-apply regularly.

The traps work by converting propane into carbon dioxide (CO2) and releasing a carefully-calibrated combination of moisture, heat and a secondary attractant. This attracts mosquitos to the trap, where they are sucked into netting via a vacuum. Once trapped, the mosquitoes dehydrate and die within 24 hours. Mosquito Magnet® traps work by mimicking the air of animals and humans — which is what mosquitoes seek out when searching for blood. Female mosquitoes approach the traps because they think they are approaching hosts. As significant numbers of female mosquitoes are killed, they cannot reproduce in large numbers and within a few weeks you will see a significant decline in mosquito populations near your home.

Let’s face it: Mosquitoes are a serious concern for almost everyone. They can ruin the time you spend outdoors and can cause painful and itchy bites. If you have pets or animals, mosquito bites can cause them discomfort and pain. Mosquitoes also transmit a number of diseases other than dengue fever.