Heartworm is caused by the heartworm larvae. This often fatal disease can affect family pets if they have been bitten by a mosquito carrying the larvae.

The disease is preventable through a variety of drugs that have been approved by the Food and Drug Administration. Keeping your pets inside may help prevent the disease, too, but mosquitoes can easily invade indoor spaces through torn window screens and open doors. Natural Ways to Protect Your Pets From Heartworm

Heartworm disease is caused by a deadly parasite that can be tough to diagnose and even tougher to treat in pets. Because pets become such a part of our families, it’s unbearable to think of something so harmful entering their bodies and leading to health problems, expensive vet bills and possibly death.

There are plenty of natural ways to prevent heartworm—as pet owners, we don’t have to let the fear of heartworm cripple us and our favorite pet activities. Natural heartworm prevention treatments ensure our animals are safe and in good care.

Mosquitoes are famous carriers of the heartworm parasite, which is a small roundworm. Heartworm disease starts when a mosquito that carries the parasite bites a dog, cat or other animal. Because mosquitoes are blood-sucking insects, each bite spreads the disease from one animal to another.

The heartworm can grow up to a foot-long and lives in the heart, lungs and major arteries of our pets. Once the heartworm finds its way into the animal, it leads to heart failure, lung damage and can potentially leave life-threatening problems in other organs.

While heartworm is commonly found in dogs and cats, it also can live in other animals, such as wolves, foxes and in some cases, even people. Wild animals that live close to homes, such as wolves and foxes, are considered dangerous carriers of heartworm. It’s also a parasite that is so widespread that it’s found in every part of the world except for Antarctica. It is most commonly found in the states south of the Mississippi River.

It takes just 10 days for the larvae to grow and reach what is commonly called the infective stage, when they can be transmitted from the mosquito to another animal.

Once the heartworm enters the new animal, it takes about six months for them to reach adult size, sometimes reaching up to a foot long. But it can take a long time for these parasites to be detected. In some cases, heartworms have been found to live five to seven years in a dog. Cats are a little different, but can still be infected. Most worms can live about two to three years in a cat.

Each mosquito season, usually in the summer, poses a risk for these animals. That’s why heartworm prevention is critical.

Adult heartworms can be found in the hundreds inside a dog. They often grow to adulthood and reproduce, traveling through the bloodstream so they can mate and reproduce.

Even after heartworms have been treated and gone, it can cause a lifetime of discomfort and pain to a dog, making heartworm prevention for dogs very important for pet owners.

It’s tough to detect any symptoms early on in the heartworm’s lifecycle. Dogs that have a large infestation or are very active often start to show symptoms first. Heartworm symptoms in dogs usually start with a mild cough, fatigue after short bouts of exercise, lack of appetite and weight loss.

In later stages of the disease, dogs might have rounded bellies because of fluid in their stomachs or show signs of heart failure. In severe cases, usually when infestation has gone on for some time, the blood flow can be blocked in the veins. This is called cardiovascular collapse, or caval syndrome, and can be diagnosed by signs of bloody urine, heavy breathing and pale gums. Surgery is required immediately in these cases or the dog may not live.

Heartworm in cats can be harder to detect than in dogs, but it can be just as deadly. In most cases, heartworms do not survive adult stages in cats. Even if the worms do reach adulthood, there is usually only one to three in a cat at a time.

While it is often less severe in cats than in dogs, young worms can still do a lot of damage, often causing heartworm associated respiratory disease (HARD).

Most cats will show symptoms for heartworm by refusing to eat, losing weight, coughing and having what looks like an asthma attack. Some cats will even have seizers or have trouble walking. Unfortunately, because symptoms are not always obvious, one of the first signs of heartworm in cats is sudden death or collapse. 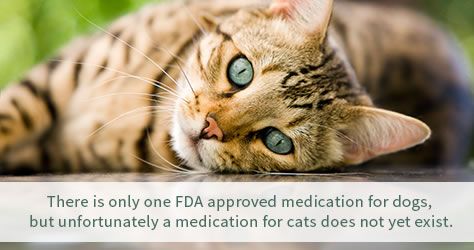 The Food and Drug administration has only approved one drug for treatment of heartworms in dogs. It’s called melarsomine.

The drug is given by injection at a vet’s office. The drug kills most adult worms within one to three months. It is recommended to cage rest the dog and restrict the dog’s activity.

Unfortunately, there is no drug on the market that treats heartworm in cats.

The drug used on dogs can cause death in cats, so in most cases, it is hoped the cat outlives the worms. Some countries are trying to develop ways to surgically remove the worms, but the practice isn’t common yet in the United States. Since the same medications used to treat dogs cannot be used on cats, preventing heartworm disease in cats is important to their survival.

Because treatment of heartworm is so challenging, heartworm preventatives are the best way to ensure your animals never need to go through the experience.

There are a number of preventative heartworm treatments that can be administered or prescribed by a veterinarian.

In the United States, the most common medications are Heartgard, Iverhart and several other generic options, as well as ProHeart and various flavor tabs. Most of these medications are given orally to pets once a month.

Other vaccines, such as ProHeart 6 or ProHeart 12, can be given by a veterinarian, as well.

Most people administer these types of heartworm prevention medications during the summer months, or in areas where the temperature is above 57 degrees year-round.

Because there are some noted side effects associated with preventative heartworm medications, many people don’t like to use them, or prefer to use them in conjunction with other methods. If there is a lapse in medication, even by just a few days, pets can be at risk for being bitten by a mosquito and getting heartworm disease.

Natural ways to prevent heartworm disease are becoming more popular as people try to ensure the safety of their pets against the disease. Even if you use more traditional methods of heartworm prevention medication, it is important to try whatever means possible to keep your animal safe from heartworm.

There are many natural ways to prevent heartworm in dogs or cats.

Keep your animal healthy. Many veterinarians believe that a healthy dog or cat can fight off a number of illnesses or other health-related problems. Making sure your animal has a well-balanced, healthy diet and receives plenty of exercise is just one important way to make sure they stay in their best shape.

While being healthy alone doesn’t prevent heartworm in pets, it does give them a fighting chance. Some alternative and holistic veterinarians believe that a healthy animal’s blood will not be attractive to mosquitoes and will actually taste bad.

Either way, it doesn’t hurt to keep your pet healthy with a good diet and frequent exercise.

Incorporate herbs in your pet's diet. Certain herbs are commonly used to keep pests at bay. Many of these herbs are naturally great for keeping mosquitoes away from your pets, thereby working as an alternative heartworm prevention for dogs and cats.

Try mugwort, garlic, spearmint, clove flower buds, black walnut and wormwood to prevent heartworm disease for pets. Talk to your veterinarian about a safe amount of each herb that can be given to your pet, based on size and breed.

Hawthorne berries are a supplement dogs enjoy eating too, and can help strengthen the heart.

Sometimes, these herbs don’t have to be eaten. Try diluting some in a water solution and spraying it on your pets fur to help keep mosquitoes away.

Essential Oils. In addition to herbs, pure essential oils can be diluted and sprayed on pet fur to help deter mosquitoes. Try geranium, mint or lemongrass oil diluted with water. Be sure not to spray it around your pet’s mouth or eyes, as it can cause irritation.

Some essential oils are event marketed as pet friendly and can be used as a natural heartworm preventative.

The oil of lemon eucalyptus has been noted by the Centers for Disease Control and prevention as a natural mosquito repellent.

Apple cider vinegar. Popular for its many healthy benefits, apple cider vinegar is something many pet owners are adding to their animals’ diets. Try a teaspoon once or twice a day mixed in a bowl of water.

The smell of the vinegar might help prevent mosquito bites while adding other health benefits.

Be careful of the times animals are let outside. While mosquitoes can bite any time of day, they are usually more likely to be out feeding later in the day or at dusk. It can be tempting to walk dogs during this time of day, but be careful of how late you walk your dog at night.

Because there are fewer people and other animals outside at that time, you and your pet might be the only feeding ground for hungry mosquitoes. Mosquitoes also don’t like the heat of sunlight and will often stay in the shade – a favorite resting place of many animals during the heat of summer.

Try going on walks before dusk or only keep your dog out for a short time in the evening. If you have a pet that spends a lot of time outside, make sure to bring them in overnight or at least in the early evening to help prevent heartworm infection.

Keep screens on windows and doors. Even if your pets are not let outside that often, mosquitoes can find their way into your home through wide open windows and doors. Now your furry friends who you thought were safe inside could be at risk of being bitten by a mosquito.

Keep screens on your doors and windows and try closing them completely when mosquitoes come out later in the evening.

IR3535. No, that isn’t a barcode for the checkout line. The ingredient IR3535 is a natural addition found in Avon’s Skin So Soft, as well as other products, that help safely deter mosquitoes. The easiest way to keep your animals safe from heartworm is to ensure they aren’t bitten by a mosquito. This product can be sprayed directly on an animal’s fur (keep away from the eyes, nose or mouth) for hours of outside fun without the worry of mosquitoes.

Make sure that pets are in a close enough range so they are within the citronella’s radius, usually just a few feet. However, be careful and make sure your pets can’t knock the candle over, as this could cause a fire or a serious burn.

While the candles work for a time, they are not a long-term solution to heartworm prevention.

Get rid of standing water. While this practice doesn’t seem like it would directly protect your animal from heartworm, it goes a long way in keeping mosquitoes from repopulating. Mosquitoes lay their eggs in standing water, meaning that bird bath, swimming pool, water-logged tire and any other receptacle that could hold a few inches of liquid is the perfect mosquito breeding ground.

Take a few moments each day to scan your property for anything that might hold water. Dump them over or put them away so rain water can’t find a place to gather. It’s a small practice but a big step in ensuring your pets don’t get heartworm.